Recently, I read a large number of online lists of favorite books. In general I found these lists inspiring. Sometimes, they frustrated me, i.e. will I ever read W.G. Sebald? Will I ever be in the in-group? I considered posting a list of my own but I didn’t quite get around to it, and like most other online flurries, the lists soon disappeared. But something stuck in the back of my mind, and eventually I realized what it was.

The truth is, if I heeded the hilarious instruction of one pass-it-on type posting to “not think too much before responding,” my favorite books were obvious. But in this age of cultivated online personae, how could I broadcast to the world that my all-time favorite books were published by Time Life, and I read them when I was 12?

Well, Vincent Price’s 1985 TV commercial for the books helps with that a bit.

I received the first one from my parents: Fairies and Elves. Soon to follow were Legends of Valor, Wizards and Witches, Ghosts, Magical Beasts, and Water Spirits. I don’t know who Time Life’s editors and consultants were for the Enchanted World series, but the stories and artwork they picked are classic, gorgeous, and not at all rated PG. Ghosts is terrifying, and that made it the best one of all. I fell in love with the Pre-Raphaelite paintings of nymphs and the lady of Shalott, Japanese fairy-tale illustrations, and provocative drawings of all manner of shapeshifters, hollow-mountain dwellers, undersea horsemen, selkies, warlocks, tricksters, ethereal fairies and elemental priestesses. The stories are told as if around a campfire. In them, there is a strong sense that magic lives in the world, even if it is declining. These stories of the fantastic, eerie, mysterious, and magical seeped into me in the best possible way. Deep, and entwined with my budding ideas about the creative process and making imaginative meaning of the world. 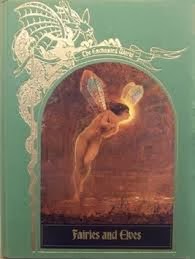 I adored these books for years, and then, during the second half of adolescence, I drifted away from my fantasy roots. I was embarrassed that as a kid I’d read mostly Arthurian legends and trilogies of novels in which the heroines  maintained telepathic links with their soul-mate spirit animals. Pretty soon I was an English major reading the 20th century literary canon (oh that horde of Johns!). That’s all fine, and Rabbit, Run is still one of my favorite books, but I had left the enchanted world behind. Then I was writing my first novel, set in Washington State’s Skagit Valley. Then 9/11 happened, then I was in graduate school. Then I found the love of my life. Then I was writing Among the Wonderful. Then I was navigating the publishing world and trying to market the book. Then my child was born.

Last August at my parents’ house, I saw those enchanted, albeit dusty, spines for the first time in a decade and a half, even though they’d been sitting in plain sight all those years. While my daughter slept, I opened up the books and again fell in love – this time with a gasp of unexpected love for my former self . I recognized the art on every page and realized that myth and folkways are threaded together with my reason for writing fiction in the first place, my connection with wild nature and my deepest aspiration as the mother of a wee one. 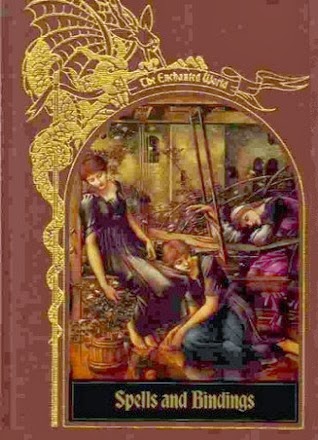 In an urban world that I often find confusing and troubling, there is a crucial nourishment and comfort for me in mythic stories and artwork, from the Inuit to the Scottish Highlanders. Partially for me, and partially for my daughter, I reclaimed the Enchanted World. Then, I poked around online, since I’d never heard anyone else mention the series in all those years. To my delight, I discovered there are 21 books in the series, and I have only ever read  7. New titles (well, new to me) included Night Creatures, Spells and Bindings, Seekers and Saviors, Giants and Ogres (shoot! I should have had that one while I researched Among the Wonderful), and Fall of Camelot. Even right now, at the moment I am writing this, I am giddy; I can’t wait to dive into those other enchanted worlds. How did I not know there were more?

It turns out that my good fortune didn’t end there. During that same haphazard online research session, somehow I landed on writer, artist, and editor Terri Windling’s blog, Myth and Moor. The post I read that day was Swan Maidens and Crane Wives, which exquisitely explores not only the power, lightness-with-knowing, and archetypal force of the swan, but also the complexities and difficulties of domestic life when part of your spirit is wild. As a new mother and a novelist, I could relate. Utilizing literary, artistic and musical (yes, the Decembrists’ Crane Wife is there too) sources, Terri Windling draws from the same well as the Enchanted World series to conjure a provocative portrait of these avian women, and she relates it all to the world as it is, right now. Terri Windling’s thoughtful, magical blog helped me then, and helps me now to anchor firmly in the world of myth and the fantastic that I’ve always loved, while also linking that world securely to the here-and-now of creative process.

One day, on Myth and Moor, I discovered that Terri Windling was packing up Endicott 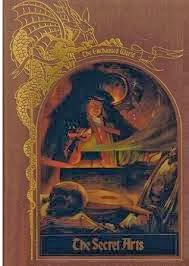 West, the writers retreat she cofounded with Ellen Kushner and Delia Sherman in the Sonoran desert near Tucson, Arizona. Through Terri’s blog posts, I commiserated with Terri, and then Ellen too, as this powerful retreat for mythic artists folded up shop. But when they announced an online auction of books from the Endicott West library, I felt the enchanted world rush in. In recent months, I’d been challenged and enlivened by elements of the fantastic creeping into my novel-in-progress. I’d been wanting to read mythic novels and stories for inspiration and lessons on craft. Here was my chance! In a blur I bid on and then won two boxes of “mystery fiction” to be chosen by Terri. The auction proceeds were to help pay for shipping costs for Terri to bring part of the library back to Devon, England, where she lives.

After I found the boxes on my doorstep, I left them unopened for many hours, just so I could savor my exquisite excitement. But of course I couldn’t wait for long. And so it is that one enchanted world leads to another and another, and it just may be that magic is not declining after all. In me it grows. 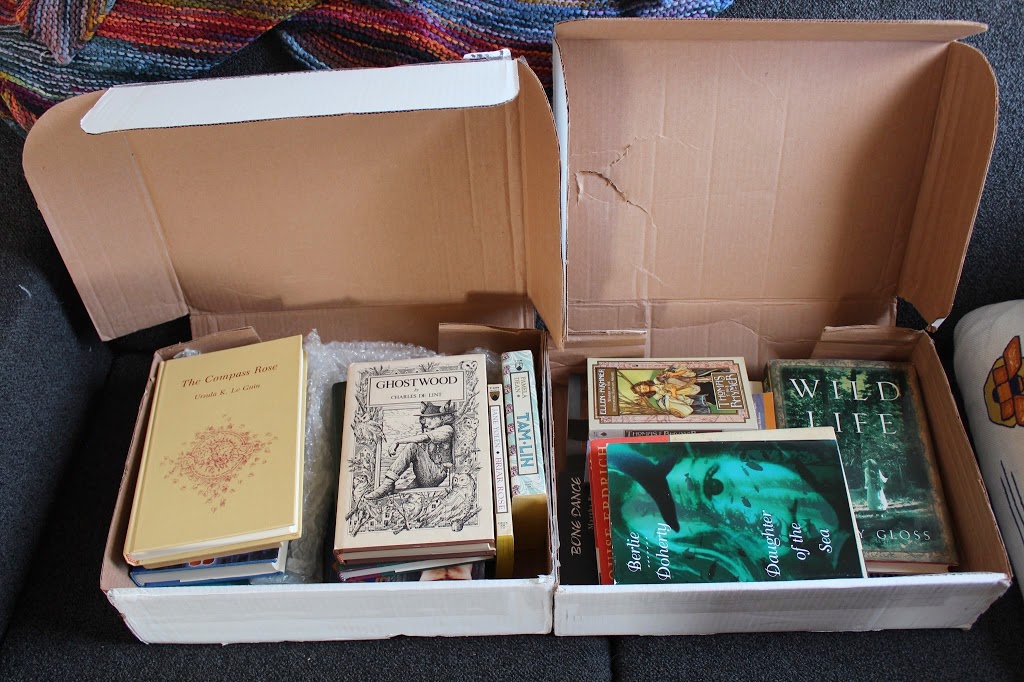