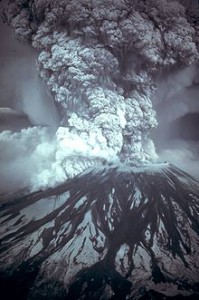 Thirty years ago today, On Sunday May 18, 1980, at 8:32 in the morning, a magnitude 5.1 earthquake triggered the largest debris avalanche in history and a pyroclastic flow of magma blew off the side of Mount St. Helens. There was an ash column 12 miles high, over a million tons of sulfur dioxide, and within twenty-four hours the citizens of Edmonton, Alberta, were brushing ash off the tops of their cars. I was five years old at the time, and I was seventeen miles away from the mountain when it exploded.

The details are apocalyptic and beautiful: Stones the size of quarters rained down from the sky. The morning turned darker than night as the ash blocked out the sun. I swear I saw a web of something like lightning snake across the ground. The sky fell. This cataclysm, with which I had an intimate and hair-raising connection, was on TV for weeks. I was famous by association. I had a great story to tell for the rest of my life. The eruption became part of my creation myth, my identity. The volcano was mine.

I polished the story over time, sometimes at the expense of the truth…or what I remember of it. What I usually say at this point is, “Yeah, and it was my first time away from home.” That gets a laugh, and it’s true. My little elementary school was off on one of its semiannual camping trips, at Camp Cispus. Thirty-two kids running around with and a handful of parent chaperones, and our two teachers, Billie and Sharon. But lately what I really want to ask is, “What in the world were those teachers thinking?” By May 18, the mountain was decidedly active. The northern side was bulging and steam rose from the top. Billie and Sharon had either gotten bad advice from someone, or else they had no idea the mountain was getting ready to blow its lid as we all packed up into vans and parents’ cars and drove south from Seattle. It was 1980, for chrissakes. No internet, no USGS Recent Earthquakes notification list, no fresh experience of tsunamis/hurricanes/floods (at least for me). But still, how did we end up there? I guess it doesn’t matter. We were just a bunch of five-to-eight year-olds out in the woods. And I’m glad we were there, no doubt about it. If we hadn’t been, I would’ve just been a spectator, the volcano would be a story that had nothing to do with me, and I wouldn’t have it up my sleeve when I wanted to make someone say, “Wow, that’s amazing!”

So here’s what really happened: I was sitting on the steps of my forest service cabin waiting for breakfast and I saw my brother (or was it another kid? I always say it was my brother but now I’m not so sure) throwing a stick up in the air near the side of another building that had a fire alarm bell attached to it. I thought, “He’s really going to get it if that stick hits the bell and it goes off. Wouldn’t it be exciting if he got in trouble?”

I was making my way toward the mess hall when the alarm went off. My first reaction was glee, but then the sky did something unexpected. I heard the sound of what I thought might be hail (did I know about hail at 5?) bouncing off the car roofs in the camp parking lot. Then a pellet hit me and fell to the ground. I picked it up. It was a rock. That was really scary. In a matter of seconds the sky darkened past “storm” to “night” and I hadn’t even had breakfast yet. By the time I ran into the mess hall everybody was standing at the window, but we couldn’t see anything because outside it was totally black.

The next thing I remember is sitting in a van clutching my little backpack. I don’t remember the panicked conversation among the parent chaperones and teachers, wherein they debated whether to stay put or leave Camp Cispus and try to make it to Randle, the nearest town. The story I heard years later (and which I usually tell with a straight face) is that the grownups were evenly divided, half wanting to stay and half wanting to leave, and the deciding vote was cast by a girl’s mom who wanted to be back to Seattle that evening in time for a date.

At the end of the story, I usually say, “It’s a miracle I ever left home again!” and people laugh and laugh. The truth is I was utterly terrified. I never mention that on subsequent camping trips I had anxiety attacks and seemingly inexplicable angst. So there I was, sitting in the backseat of the van next to Julie Bowden, crying my face off with a damp strip of t-shirt pressed against my mouth so I wouldn’t inhale ash. We were inching along the road at 2 mph and at one point we passed an abandoned car pulled off to the side of the road that still had its driver-side door open. Julie Bowden leaned over to me and told me to shut up. The image of her bespectacled face when she said that is the second-most vivid memory of the whole day.

When we finally reached Randle, we took refuge in a church. They gave us small cans of Tab and white bread with margarine. I don’t usually say so, but these items comprise my most vivid memory of that day. Soda pop? White bread? These were things I never got at home. I guzzled and munched and asked for more, sitting on a folding chair set up right in the middle of the church. What I barely noticed at the time, but what has since taken center stage at this point of the story, is the fact that there were a bunch of ash-covered bikers (Hell’s Angels, I usually say) lounging around with us. It is such a cool image, these bikers, stretched out on pews in their leather and denim, waiting out a volcano. I wish I’d noticed them, I really do, but all I remember is making myself sick on Tab.

Eventually we made it back to Seattle. I don’t remember my mom and dad embracing me, or the looks on their faces as we stumbled out of the van. In recent years, that’s the part of the story I find myself thinking about, not my volcano at all, but theirs. What could they have felt, knowing their children were out there somewhere, trying to get home in the middle of a volcanic eruption? My volcano makes a great story, but theirs is more traumatic by far.