Between June 14 and July 2 I participated in The Arctic Circle‘s expeditionary residency, an arts-and-science-driven voyage on a barkentine sailing ship up the west/northwest coast of Svalbard, Norway. During this trip I absorbed the landscape (sea, mountains, ice, river, sky) and worked on my novel-in-progress, which is largely set in Svalbard. Here is the first installment of selected journal entries that I made during the trip. 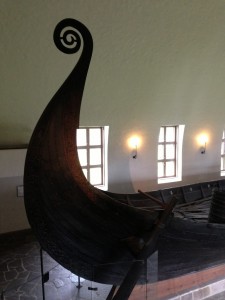 I’ve been up for 27 hours. Two planes, two trains, two buses and a whole lot of first-day-in-a-new-city flailing. Special train or regular? Why doesn’t my credit card work in the ticket machine? Am I on the right bus? No! Yes! But no matter, I got to see the Viking ships. Millenium-old oak carved with serpent heads, spirals, knots. So much grace in the craftsmanship. Metal puzzles, remnants of woven tapestries, bridles, jewelry. And to think that this most beautiful ship, filled with riches, was the burial place for a Viking noblewoman (perhaps a shield maiden). The actual burial chamber was there in the museum too, a peak-topped tiny cabin of charred wood, reconstructed post pyre. I wonder if the oils from her earthly husk infused those old beams and if she haunts this place. Wood, copper, iron, stone. Woven sails, ships full of men each sitting on his own sea chest as a bench. Moving silently through fjords to the open seas. Rambling now just to savor this day. Turning toward the sea, welcome the allies and ghosts of this journey. Rest in it, the woven shawl, the braided rope, the metal and stone baubles.
Longyearbyen, Svalbard
June 15
I am here. Shale and snow patch. Barnacle geese, Svalbard reindeer, snow bunting, glaucous gull. One small moss campion cushion glimpsed while walking back to New Town. Passed a tipi full of people blasting the Jackson 5. So many children here, playing outside in snowsuits. There is an Arctic Nature Guide school here…be still my heart. Random coal buckets and mining infrastructure scattered across town, and an old boarded-up mine high on the mountainside, hanging over this place like a ghost. The landscape something out of myth – citadels, battlements, precipitous heights. Rivers of shale flowing down and turning to moss and then the sea. All of it beneath a thick overcast.
Longyearbyen, Svalbard
June 16 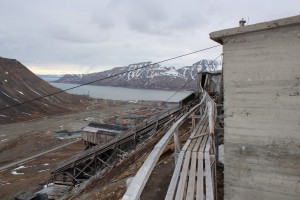 Last night I hiked to the abandoned mine. Up scree that changed from brown to red to a soft black sand that must be coal. Above the mine little auks gave me a true welcome to this place: their ominous, insane laughter mocked the human presence here. My eye constantly travels up to these stone faces above me. I try to read the expressions in pinnacle and crag. Many-faceted meaning many faced. You can search those stone faces all you want, all you can handle for as long as you can stand the mystery of unanswered questions. Inside the mine, treacherous going. Would hate to break a leg before the trip really begins. I inched inside for just long enough to sense jagged icicles and missing floorboards. Broken equipment, graffiti in many languages. I’ll stay out in the perpetual daylight instead. It’s 1 am. Time to head down to the valley and see what else is stirring.
Isfjord, underway
June 17 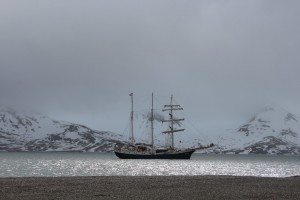 Yesterday we boarded the good ship Antigua, which is a square-rigged barkentine and part of the Dutch Tall Ship Fleet. I was met by three spectacular female wilderness guides: Theres, Sara and Åshild. Purple sandpipers, northern fulmars, a puffin and arctic terns. Standing at the rail, my heart full to bursting. My cohort is amazing. Already conversations about ethereal Norwegian doppelganger spirits who slip between different dimensions of reality, chapter 42 of Moby Dick, ravens. Everywhere I step I trip over inspiration. The sea at first bordered on emerald and then shifted to a strange, white-cast blue. As if the color intends to be friendly and yet within the white opacity you sense only death.
Break open preconception. Toss habitual modes overboard. How can I take a cue from these improvisers, my companions? Some of them shipped supplies that did not arrive in time for our departure. Some counted on a trip to the Longyearbyen hardware store but it was closed. Mia rolling her tarpaper down the mountain. Amanda collecting vintage ropes and spinning paper to rope like some patron saint of seafarers. I hold my story, The Gyre, in my cupped palms. It is time to lose my knowledge and move the book forward into new territory. Listen: where is it?
by Stacy Carlson