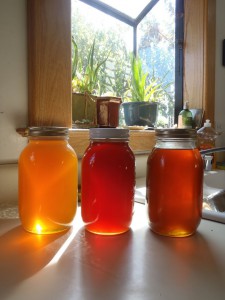 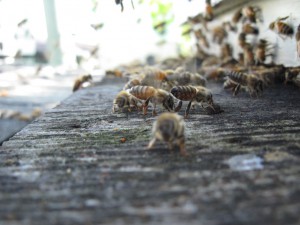 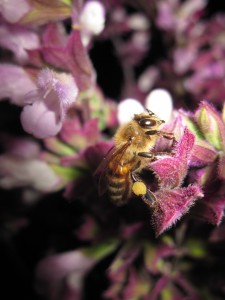 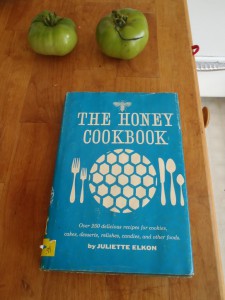 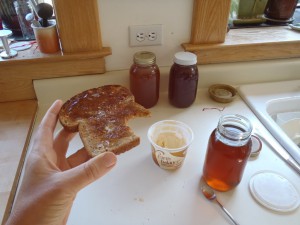 In our age of declining biodiversity, it’s difficult to imagine a time when the US Department of Agriculture regularly hired explorers to hunt down new fruit and vegetable varieties across the globe. But this is exactly what Frans Nicholaas Meijer was hired to do in 1905. During his stint as a USDA agricultural explorer, he traveled all over the world and returned with many new species that went on to be widely cultivated in the States. He is best known for his Chinese imports, including Gingko biloba, soybeans, and Chinese cabbage, among others. Apparently afflicted with a severe case of wanderlust, he spent his adult life traveling, sometimes on foot across vast distances. Sadly, in 1918 at the age of forty-three, he drowned in the Yangtze river. 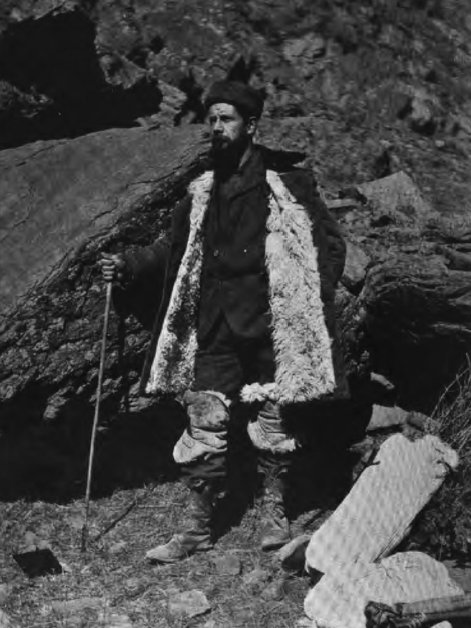 I am particularly grateful to Meijer for bringing us the lemon that now bears the anglicized version of his name. Thought to be a cross between a lemon and a mandarin, the round, thin-skinned Meyer lemon has a delectable floral scent and taste, and is less bitter than a Eureka or a Lisbon. There are two abundant Meyer lemon trees in our yard, and this yellow jewel has provided us gallons of lemonade, (often infused with rosemary), quarts of marmalade (honeyed and vanilla bean), limoncello galore, and Moroccan style preserved lemons, not to mention untold squeezes over salads, poultry and fish. But there is one recipe that stands above all the other lemon-oriented delicacies I’ve made, a recipe so heavenly, so wickedly and perfectly decadent that the people who eat it swoon off their chairs. It is something I would have loved to make for Frans Meijer in gratitude. My landlord, the man who planted the trees in our yard, handed me the recipe very casually a few months ago. Let’s just say my response upon first tasting the result was anything but casual. I would describe it more as a joyful seizure. It is Meyer Lemon Custard Cream Pie. Yeah. It is insanely good. This recipe is from Sunset Magazine. There’s no date on the photocopy my landlord gave me, but the short article is by Elaine Johnson. 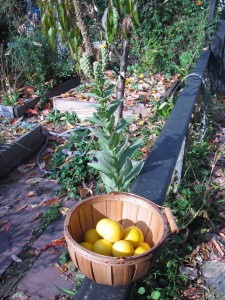 Prep and cook time: About 40 minutes, plus two hours for chilling. 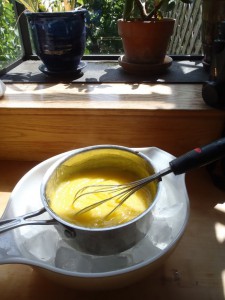 1. Grate 2 teaspoons peel from lemons. With a zester or Asian shredder make a few long strands of peel to decorate the finished pie. Squeeze one and one-third cups juice from the lemons.

2. In the top of a double boiler (I use a makeshift boiler using two saucepans and it works fine), mix the cornstarch and sugar. Stir in the lemon juice and grated peel. Fill the bottom of the double boiler with 1 inch of water. Place pans over high heat and bring water to a simmer. Stir until the mixture isthick and shiny, 8-9 minutes. In a bowl, whisk eggs to blend. Whisk in about ½ cup of lemon mixture, then return all to pan. Stir until mixture is very thick and reaches 160 degrees on a candy thermometer, about 5 minutes. 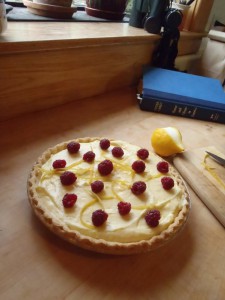 3. Remove top pan. Place it in a bowl of ice and stir often until the mixture is cool to touch, about 6 minutes.

4. In a bowl, beat the cream with a mixer (or with a whisk, if you’re me) until stiff. Fold in lemon mixture, then spread evenly in pastry shell. Scatter reserved strands of peel on top and chill for a couple of hours. I’ve used rosemary blossoms, raspberries, and blueberries on top of the pie.