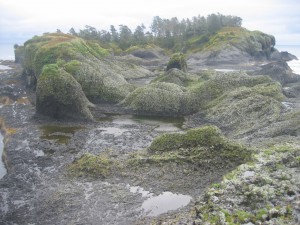 This place mirrors the sea in stone. When a storm surges on its windward side, it’s as if the island leans into each swell and just watching it I pitch and stumble from these massive forces straining against the boundaries of their physical form. 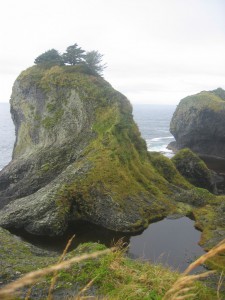 Salt water, basalt, seaweed, wind, and windblown grasses layer into a home so rich and intricate that nudibranchs – those tidepool naiads – preside here. Spruces grow at each end of this hourglass and tidewater cinches its waist.

A true ornithopolis, each summer the island is home to half a million nesting birds and can be divided into numerous avian boroughs. Most familiarly, the branches support crow, raven, eagle, sparrow, and hummingbird nests. In the duff there are storm petrel burrows. On the island’s rocky periphery live cormorants, murres, pigeon guillemots, and in grass huts there are puffins. Fox and song sparrows conduct busywork in the salmon berry brush and oystercatchers referee. Rhinoceros auklets live in smooth soil caves and by the light of the moon carry sparkling silver fish home to their young. The basalt ridges running the length of the place are the gulls’ domain. In each neighborhood there are disputes and spies, loudmouths, children playing, and weather-worn elders sitting alone. Walking from one end of the island to another, I feel a hundred discerning eyes tracking me. 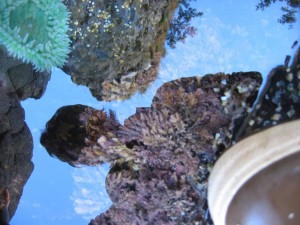 Buffeted by wind and rain, stepping lightly, oft shat upon and always filled with wonder, I lived here, on Saint Lazaria Island. What can I tell of it? There is so much to an island of birds I don’t know where to begin except here: Every night somewhere past midnight, thousands of leach’s and fork-tailed storm petrels flew back to the island from the ocean. To find their burrows, they call out to their respective mates, dozing inside their burrows. Close your eyes. Imagine you are sleeping in a tent near the sea. You ascend gently, slowly, to the waking world listening to a hundred thousand bird voices purring, whistling, whirring and cooing. They escort you, a collective Morpheous, influencing your dreams (how could they not?) and showing you that the journey from sleep to waking can be not only perceived, but made into a new state of consciousness and savored.
Living on Saint Lazaria, surrounded by these feathered lives, my perceptions sharpened. I paid attention to the cues from other birds. Danger approaching? Safe to let the young ones play in the tidepools? Time to duck down out of the wind? Where is the food? I let myself become more of a bird myself. My mind lifted out of that rooted, earthly place into lightness. My eyes saw more. I wished for a bird cloak; a rustling parka of down and flight feathers to pull over myself as I knelt on a shelf of basalt, gazing down at the sea. One day I fell asleep on one of the island’s damp, shell-and-pebble beaches. I opened my eyes and saw one feather drifting down from the sky. I got up and walked until I was directly below it. It was a single piece of down, probably from a raptor. The day was still enough that its trajectory was straightforward. I lifted my hands and the down landed on my palm.
by Stacy Carlson