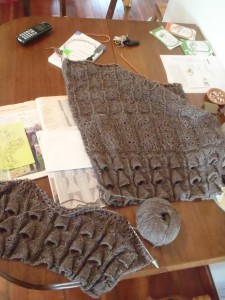 Maybe it’s because I’ve been knitting the same lace stole for almost three years and I am grateful that the process has taught me the virtue of patience. Maybe it’s because the feeling I get while I’m sitting at my Ashford spinning wheel, pedaling with one foot and practicing the short forward draw, is one of peace, integration and a sweet kinship with the spinners of past centuries. It could be because I just finished writing a novel and I’m suddenly, impossibly, gleaning lessons learned as I move ahead to my next literary endeavor. Or maybe it’s because you just can’t beat the sense of satisfaction that comes when you give a friend a handmade gift. Whether it’s plum jelly or a hand-knit scarf, there is  something fundamentally life-affirming about making. Whatever the reason, lately I’ve been relishing the ways that craft is part of my life, and enjoying some new twinges of understanding about it.

I’ve always been uncomfortable calling myself an artist. As a novelist, I understand my “art” not so much as the numinous kernel at the heart of every painting, sculpture, poem, and novel, but as the perseverance, the doggedness it takes to build a form for that kernel to live in. For me the word art implies magic, and while I am the first one to admit that there is something inexplicable and nourishing (not to mention gratifying) about those moments when something unexpected and spontaneously right spills onto the page and becomes a touchstone leading me forward, most of the time I am working on my craft in a decidedly un-magical way. I am a craftsperson. 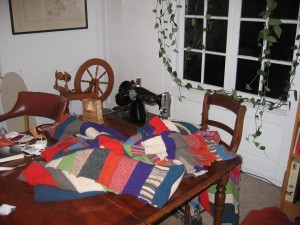 That said, sometimes the word craft is unsatisfying. There is that pesky division we’ve created between high art and lower craft. Craft smells faintly of stencils and crocheted stuffed animals. Or, it can imply purely utilitarian objects. Often, when I put down my “real work” of the day and amble out to the workshop to spin fiber, knit, or dream up a sewing project, I feel just a tiny bit frustrated to be moving “down” to handiwork, and that downward movement implies a departure from the world of ideas into something not quite as valuable. For years I’ve demoted all the crafts I practice. In this way of understanding things, I’ve denied the myriad ways that craft integrates and transforms my consciousness.

A Way of Working: The Spiritual Dimension of Craft is a book edited by D. M. Dooling (1910-1991), the founder of Parabola magazine. So far I’ve only read three of the essays in this slim volume, but already they’ve lent a crucial hand in reconciling my mistake in splitting art from craft. I sense a profound consequence for me personally in mending this rift. To be able to see my work as knitter, spinner, and designer as kindred in some way to my work as a novelist, and not “lower,” is a great step toward inner unity, one that I am eager to take. From the introduction to A Way of Working:

“Craft” originally meant “strength, skill, device,” indicating at its very inception the basic relationship of the material, the maker, and the tool: the opposition of thrust and resistance and the means of their coming together in a creative reconciliation. The artist must be a craftsman, for without the working knowledge of this triple relationship subject to opposing forces, he has not the skill to express his vision. And if the craftsman has no contact with the “Idea,” which is the vision of the artist, he is at best a competent manufacturer. Art and craft are aspects (potential, not guaranteed) of all work that is undertaken intentionally and voluntarily…Both art and craft must take part in any activity which has the power to transform.